In this one-point chess endgame training article, I want to show you the importance of keeping the end in mind rather than keeping material on the board, especially when you reach the endgame with a material advantage.

In the illustration White has arrived at the endgame with a clear material advantage. White is ahead by a knight and a pawn. However, Black is threatening to promote his pawn and his king is attacking the white knight.

What should White do?

The first instinct of many casual players would be to move White’s knight away from the Black king, such as Nb5+, which also seeks to block Black’s pawn from advancing. However, Black can simply move his king back to b4 and threaten the knight again.

On the other hand, nothing is achieved by moving the knight away from the black a-pawn, which is Black’s major asset in this endgame scenario.

White is willing to sacrifice his knight to gain time to promote his pawn and WIN the game no matter how Black responds.

For example, if Black takes the knight, White’s f-pawn promotes ahead of Black’s a-pawn, but look at the a1-h8 diagonal…

The black king and the promotion-square (a1)

are on the same diagonal, which means

Black will lose his queen as soon as

she arrives on the board!

The Psychology of Casual Players…

Expert players will tell you that you should “play the board, not your opponent,” which is fine if you are an expert, but if you are not, and if you are playing a casual game, “playing your opponent” by appealing to his latent greed is often worth a try!

One way to do that is to offer something juicy, such as the white knight in this example. More often than not, a casual player will accept your “poisoned gift” rather than make a better move, as happened in this game, when I offered my opponent my knight, which was the last remaining minor piece (bishops and knights) on the board.

Here’s how the game ended

In short, black took the bait, lost tempo and ended up fatally skewered.

What if Black declines to take the knight?

If Black declines to take the knight, and instead advances his a-pawn to a3 (which is a better move, by the way), White should respond by leaving his knight alone and advancing his f-pawn to f6. Black will promote his queen first, but White’s f-pawn will promote immediately afterwards and Black’s checking options are limited. White should be able to contain the situation and go on to win. 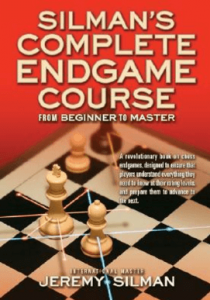 To develop your ability with chess endgames in a more methodical and detailed way, read Silman’s Complete Endgame Course: From Beginner to Master

Silman is an International Master who is also a clear communicator and an excellent teacher who understands the needs of amateur players.

If you have any comments or questions about anything in this blog post, feel free to leave a reply in the comments section beneath this post.

Damn! Your site is great! Your niche is very interesting.
I used to play chess on amateur level a few years ago. But i quit. I just remember a few things now.
I really liked your site layout and the theme. Seems like you can do great stuff with it. Keep up the good work!

Hi Tyler, Thank you for the positive feedback! I also went a long time without playing any chess, but took it up again about three years ago.

Awesome description – this was so easy I could understand it!
I am by no means a good player – recently I played against a person for her first ever game, and she beat me (with a little coaching from my “friend.”)
This is great and easy to understand, but would you recommend this book for me as a total novice, or do you have something more suited to my level?

Thank you for the positive feedback! I’m glad you can understand my explanations.

As for a good book, I have only flicked through it, but Chess For Dummies might be a good place to start.

Good luck in your efforts to improve your chess!

Hello David,
I’m totally impressed by the amazing work you made with this website. I like the size of the font on your website and also the pictures you added.
It is helpful for anyone who wants to spend quality time with a noble passion. I wish you good luck and keep up the good work!
Cristina

Thank you for the positive feedback, Cristina!

This is some great information that I will use. I have just been starting to play chess and feels like I do the same mistake that you’re talking about.

As soon as I’m at the endgame I focus more on keeping my pieces on the table than to just go in for the “kill”.

Maybe sacrifice a piece to end the game. Sometimes the last part of the game can take a very long time.

Thanks, i will try this one out.

Thank you for your comment, Marcus. Endgame sacrifices can be an exciting and dramatic way to finish a game, so well worth exploring.

I really like how this game has played out as this brought back some memories for me when I used to play so many years ago.

I would sometimes be in a position where I needed to sacrifice a rook, bishop or knight, only to give me the advantage where I could put my opponent into checkmate.

I think that you have set out this whole scenario very well and it’s quite easy to follow, it shows that chess is a game that really makes you think; good post, well done.

Thanks for the great tips! I’ve come back to the game of chess after several years and I have started playing with my son. He’s really good, and I’m trying to encourage him to learn as much as he can about the game and really learn and understand it as best he can.