When it comes to castling in chess, we are usually taught to castle early, after developing some of the minor pieces.

The idea is that it can be dangerous to leave your king stuck in the middle of the back row where he may be exposed to an early attack. Generally speaking, it is more secure to get your king off to one side of the board, behind a barrier of pawns, and perhaps a knight, a rook and/or a bishop.

Quite often, however, other concerns cause one or both players to delay castling, or not to castle at all. In a situation where you have castled and your opponent has not, Jeremy Silman offers a “basic thesis” for you to follow, which is,

to train your mind to view that central King as a target, and immediately try and ascertain whether there’s a way to smite it.

How To Reassess Your Chess

How A King Under Pressure May Castle Into Deeper Trouble

Interestingly, if you begin to threaten your opponent’s king while it is in the center, you may cause your opponent to castle into even bigger trouble! This is something I have recently encountered both in an online game and an over-the-board game.

In today’s post I will look at the OTB game I played back in January 2016. My opponent is an unrated player, but probably somewhere in the lower 1500s.

In the OTB game, shown in the photograph, it is Black’s move.

Neither player has castled. However, whereas White’s king is under no pressure, Black’s king is being eyed by the White’s white-square bishop on b5, which is pinning Black’s knight on c6.

Black’s kingside pawn structure has been disrupted, but there are two pieces, the queen and bishop, blocking Black’s king from castling on the queenside.

Black also has a weakly defended pawn on d5, which is being threatened by White’s queen, preventing Black from unpinning his knight with B-d2, which would leave the d5 pawn completely unprotected as the bishop would now be blocking the queen from defending d5.

Adding to Black’s difficulties, the pinned knight is only defended by the pawn on b7, so if the knight is taken, Black’s queenside pawn structure will also be disrupted when the pawn re-takes on c6.

What would you do, as Black, in this tricky situation?

Clearly, you must think about how to strengthen your defence.

A move such as a6, attacking White’s bishop, will cause White either to take the knight, or retreat his bishop to a4(??) where it falls to Black’s b5! (B x b5, a6 x b5). With B x c6, b x c6, Black suffers some more pawn disruption, but strengthens the defense of d5 in compensation. Once the bishop has moved off c8, Black’s rook can threaten White’s queen on the b file.

Black Castles Into The Soup

However, the game did not develop in that direction. Instead, Black exchanged his knight on e4 for White’s bishop and then castled into danger:

Clearly, Black has just committed a massive blunder by failing to realize that the minor piece exchange he just initiated opened up the h-file for White’s rook which was pointing at the unguarded pawn on h6.

Even had that blunder been avoided, by castling on the kingside, Black is moving his king into a poorly defended part of the board and has done nothing to strengthen his defense. These are fairly common amateur blunders at this level.

Black soldiered on, clinging to the forlorn hope of escaping with a stalemate, which did not happen.

In my next post I will use the example of a player, rated in the 1600s, who also managed to castle into trouble. 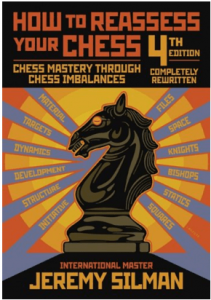 For a study of how to take down an un-castled king, see Part 5, “Dragging Down the Central Enemy King!” in the 4th edition of How To Reassess Your Chess by Jeremy Silman.