If you are playing Black, and White opens with “e4” (also known as the King’s Pawn Opening, or P-K4 in the old notation), one solid response that I prefer is to reply with “e6” – i.e. move your own King’s Pawn one space forward.

White’s second move is typically “d4” – i.e. moving the Queen’s pawn forward two spaces next to the King’s pawn. Black then plays “d5”, advancing his Queen’s pawn two spaces forward. Those are the opening moves of the French Defense (or French Defence in British English):

The Advance Variation of the French Defense

A common response to Black’s second move (d5) is for White to advance his King’s pawn to e5.

The best way for Black to respond is by attacking White’s d4 pawn  by moving the pawn in front of the Queen’s Bishop to c5 (see diagram).

In the usual course of play, White will not take the pawn. Instead, White will respond to Black’s pressure by defending the d4 pawn and completing his pawn chain. To do that White simply advances the Queen’s Bishop’s pawn one square to c3.

What is happening in this series of opening moves, the Advance Variation of the French Defense, is that White is claiming a large area of central and kingside space and cramping Black’s “bad” white-square Bishop. On the other hand, Black is aiming to undermine White’s central pawns and dominate the queenside.

However, in the course of events, you may find yourself playing the French Defense an opponent who, to put it politely, does not know what he or she is doing. This recently happened to me in an online game and it serves as a useful tip whether you are playing as Black or White.

What Happens If White Takes The c5 Pawn?

If White goes ahead and takes the c5 pawn, just take it in your stride, but understand that White has just handed you a gift, which you should take, specifically, take White’s c5 pawn with your Bishop!

The purpose of White’s opening moves has already been lost. The advanced pawn is now unsupported and White’s hold on the center is very shaky.

Meanwhile, Black has developed his “good” Bishop on a good square, eyeing the pawn on f2. All of a sudden, Black has the initiative.

Is White A Zombie?

White now attempts to prop up his central pawn by playing f4. Unfortunately for White, such a move does nothing to develop his pieces or address the weakness on f2.

Black responded by continuing with his plans: Qb6

Moving the black Queen to b6 early in the opening game is a typical feature of the Advance Variation of the French Defense. It eyes the weakly-defended pawn on b7 and also adds pressure to the d4 square; remember, that’s the square where White’s pawn was SUPPOSED to be!

However, in this particular game, black now has a battering-ram aimed at White’s f2 and g1 squares, threatening to win a Knight, or a and a Rook for a Bishop… At least, that is what you might notice first of all. More importantly, Black is also threatening checkmate in two moves, but White is a zombie and only responds to what is in front of his nose…

White, seeing the immediate danger, but not the fatal threat, moved his Knight: Ne2?

There followed, Bishop to f2 check, forcing White’s King to move to d2, then Queen to e3, Checkmate!

The French Defense is a solid defense against strong opponents, but it can be devastating against zombie players who tend to gobble any pawn that is thrown their way!

Key point for White: If you choose to play the Advanced Variation of the French Defense, your job is to defend and extend your pawn chain in the opening moves.

Key point for Black: The French Defense is a solid defensive option against White’s e4 opening. If White plays the Advanced Variation, your goal is to undermine his pawn chain and develop on the queenside. If White takes your c5 pawn as soon as you move it, take back with the Bishop and move your Queen to b6 to dominate the g1-b7 diagonal (and maybe win in 7 moves). 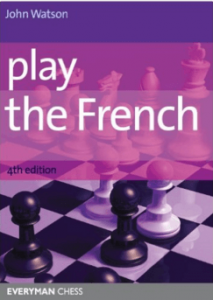 An excellent book on The French Defence is Play the French by John Watson. Make sure you get the fourth edition.