Bishops in chess can be tricky pieces to place correctly on the board in the opening game. Here is an example of a Queen Pawn opening blunder that involves the loss of White’s black-squared bishop. My opponent was the White player. 🙂

My opponent opened with d4 and I replied with Nf6. The first three moves suggested to me that White was playing a delayed Queen’s Gambit.

However, what followed was an ill-conceived string of bad Bishop moves that led White to disaster:

8. Bc3?? This is where things unravelled for White. Can you see WHY moving his bishop to c3 is a bad move here? Can you guess what Black did in response? What would you do if you were black?

Bishops in Chess Openings Can Occasionally Be Moved Twice In A Row!

For example in the Queen’s Gambit, White may place his king’s bishop on d3 almost as if to invite black to take his c4 pawn. If Black takes the bait, it is acceptable for White to retake with the bishop he just moved to d3.

Here is an example from a game between Reuben Fine and Emanuel Lasker, in Nottingham, England, in 1936 that illustrates this point:

After Black castled, Reuben Fine (White) moved, 6. Bd3. Lasker captured the c4 pawn, dxc4. Then Fine recaptured with his bishop and went on to win the game.

How Careless Moves Can Lose Your Bishops In Chess

Going back to the game I was playing last month, White has two badly placed bishops on the queenside of the board (unlike Fine in the 1936 game, above).

The move Bc3 is bad not only because White moved his bishop twice for no good reason. More seriously, in moving his bishop to c3, he blocked his c-pawn and in doing so, he trapped his white-squared bishop: 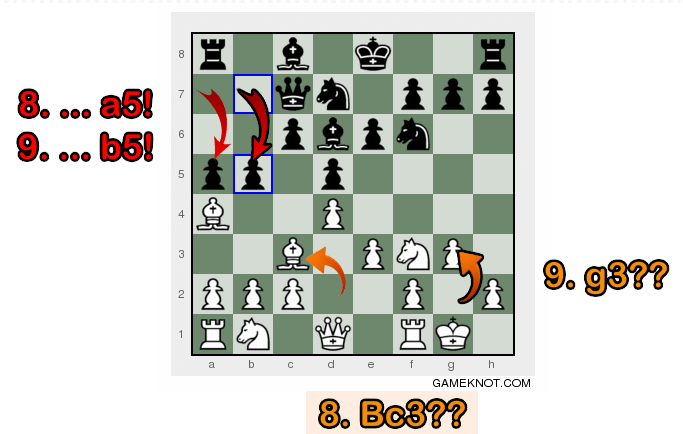 Seeing the blunder, Black responds with 8. … a5, followed by 9. … b5. Why not immediately attack the bishop with 8. … b5? Because that gives the Bishop a chance to escape via 9. Bb3 and 10. a3. Although the escape route is also available after 8. a5, moving the rook’s pawn also prepares for what I assumed would be an attack on White’s black-squared bishop with b5 and then b6. The thought was also that if White did not notice the danger to his white-squared bishop, the trap would be inescapable with a5 followed by b5.

However, in the event, my opponent’s mind was on the pressure my queen and bishop were exerting on his h2 square, causing a second blunder in a row with the weakening g3 move.

That is what can happen in games at this level (somewhere around the lower 1500s I guess). Players are often taken in by false threats on one side of the board and overlook real dangers on the other side.

After 9. g3?? b5! White’s bishop is now completely trapped. It will be exchanged for a pawn:

Losing One Bishop May Be Regarded As A Misfortune…

To lose one bishop may be regarded as a misfortune; to lose both looks like carelessness, as Oscar Wilde once said (or words to that effect). Even so, that is exactly what my opponent managed to do. He allowed his black squared bishop to fall into an even tighter trap. Here’s how:

The game is a good example of how not to deploy your bishops in chess openings when playing as White. The 8th move, Bc3 was a blunder, but not fatal to White’s game. It involved the loss of tempo and the gaining of an advantage for black.  It limited White’s options on the queenside by preventing the advance of the c pawn and placing White’s white-squared bishop under immediate pressure.

When playing as white, keep these points in mind before you move your bad bishop twice in a row. When playing as black, look out for opportunities to exploit this kind of bad bishop blunder by white. Bad moves of bishops in chess is something that often occurs in casual games, pub chess. It can also happen in amateur games where players are rated in the 1500-1600s.